The boys have been long overdue for a spring/summer closet update. Jackson has hit a major growth spurt and all of his pants went to ankle-length practically overnight. Plus he’s also managed to put holes in the knees of all of his jeans. Dylan, fortunately, inherited lots of barely worn size 3T summer clothes from his brother, but is still missing a few things that are more “him.”

While I was feeling the need to shop, I saw Emily from Two Peas in a Prada posting on Instagram about how she basically creates mini capsule wardrobes for her cute boys by buying lots of mixable, matchable pieces that make getting dressed (and packing!) super easy. Seeing her do that was just the push I needed to hit “order” and so I wanted to share with you what I bought for the boys for Spring/Summer this year.

Overall, my philosophy when it comes to shopping for my kids is that I like to have them look nice but I don’t want to spend so much money on their clothes that it pains me when they inevitably stain them or rip them. I also try to pick a color scheme for any given shopping season and stick with it as best I can. That way it’s easier to pack for trips, and just for them to get dressed on any given day.

So read on to see what I’ve bought for the boys for summer, and you can also click on any of the items in the collages below to find out more about them and shop them! 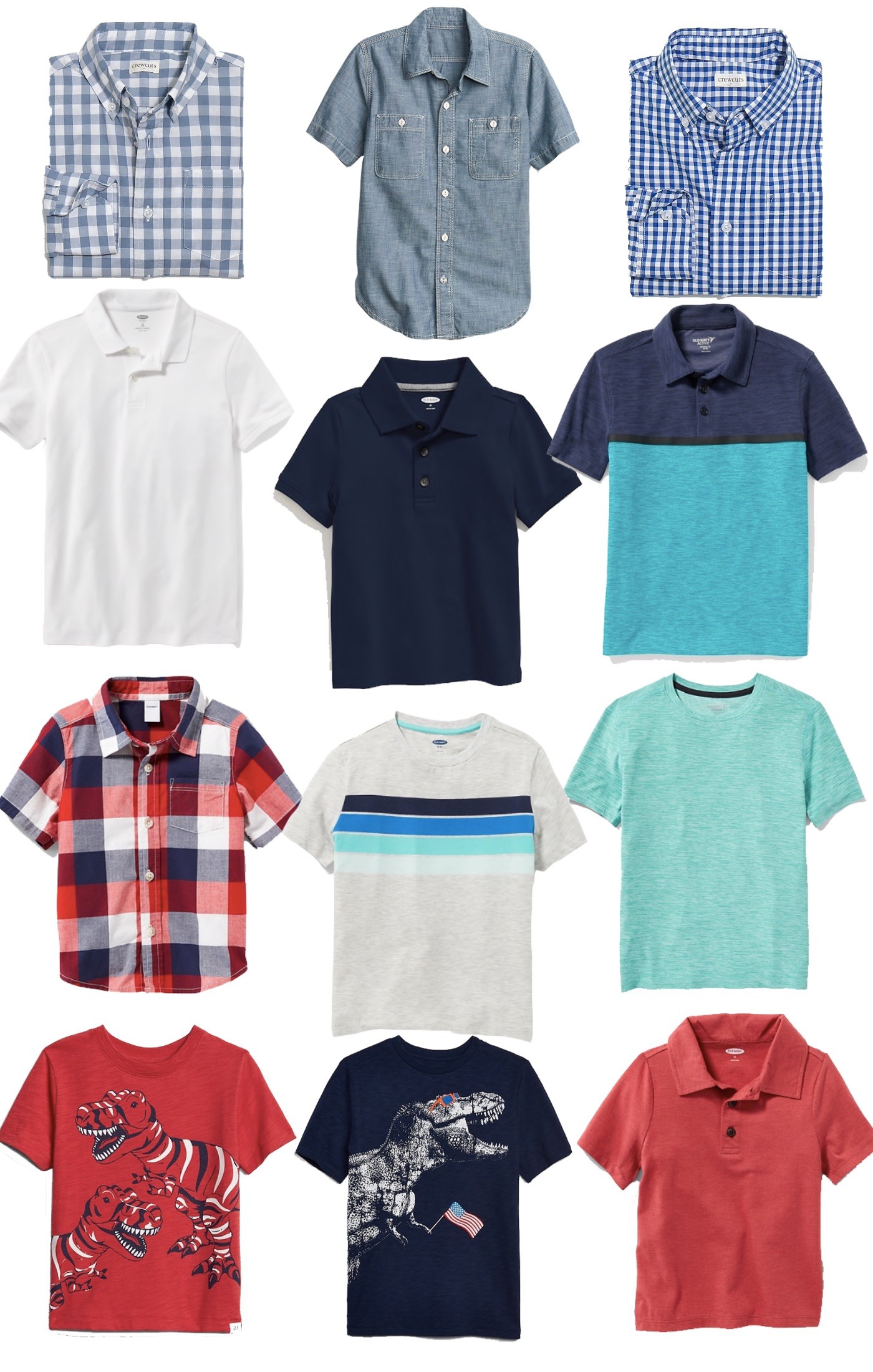 I started with a few things we needed a whole restock of, namely polo shirts and what I call “daily tees.” This time, I picked up a few Old Navy polos in a different colors so that I can get some of them monogrammed and leave some of them alone. Jackson is also taking golf lessons this summer so I did a couple athletic polos for that.

They were seriously due for some dress up clothes, as well. One of the places we go up north requires button down shirts and no jeans, so I picked up a couple button-downs from J.Crew Factory. It’s the first time I’ve ever shopped there for the kids and I really like what we picked up!

And since it’ll sneak up on us before we know it, I bought their 4th of July outfits. I know we have two days of activities, one of which is dressier, so I went with the obvious patriotic dinosaur tees and then cute, festive short sleeve button-downs.

I do try to get mostly the same (or close to the same) thing for both boys. It’s not necessarily because I’m completely dedicated to making them match everywhere we go, but more so that they don’t get mad because one has one shirt and the other doesn’t. Any way I can avoid unnecessary disagreements! 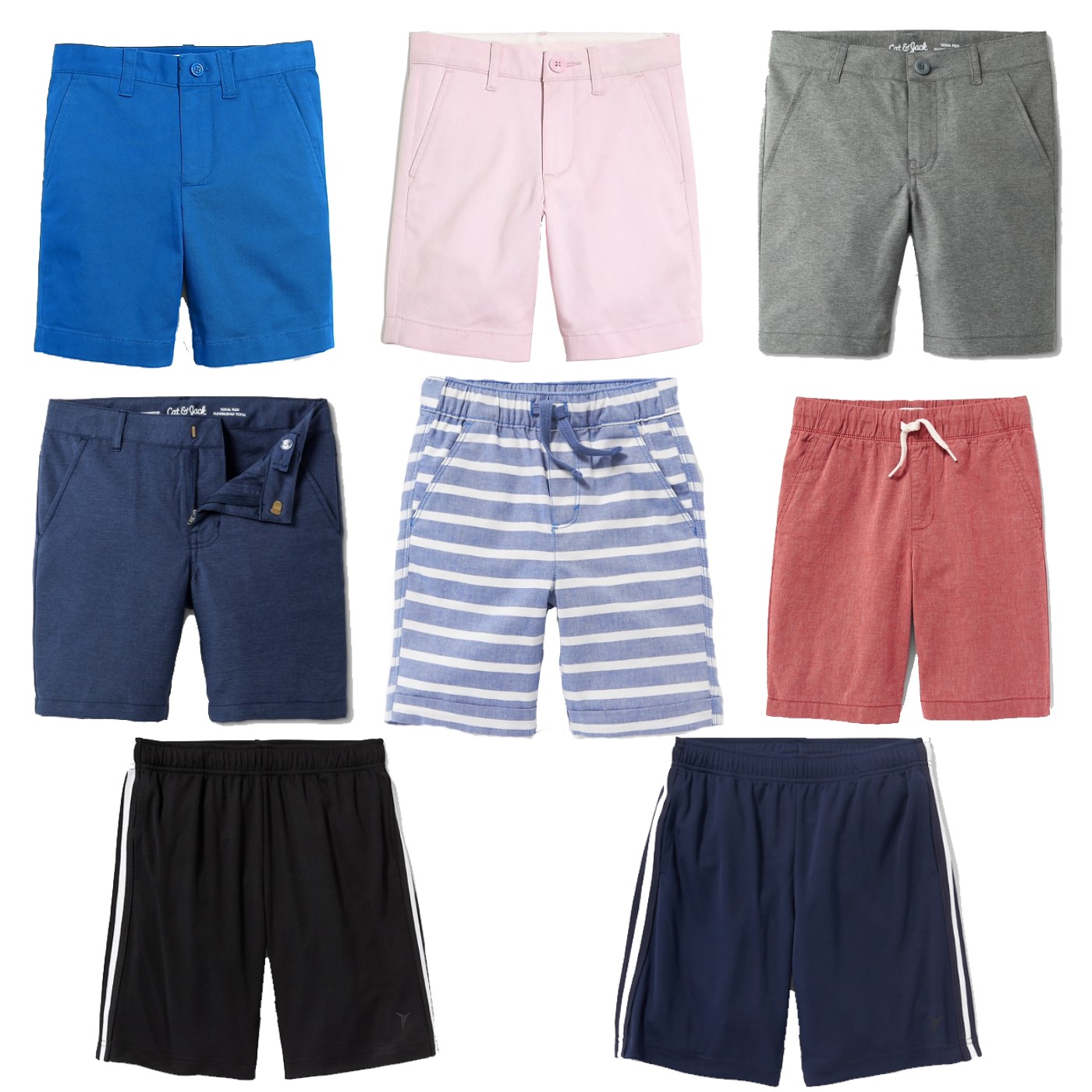 Growth spurts are few and far between around here, but by the time we went to Disney for Spring Break, last year’s shorts were a more than a little too short! So we restocked there too. I did dress shorts from J.Crew Factory to go with those button-downs I mentioned above, and then I love the easy pull-on shorts from either Target or Old Navy.

I also tried the quick dry shorts from the Cat & Jack line at Target because I think they’ll be good for golf, camp and travel. 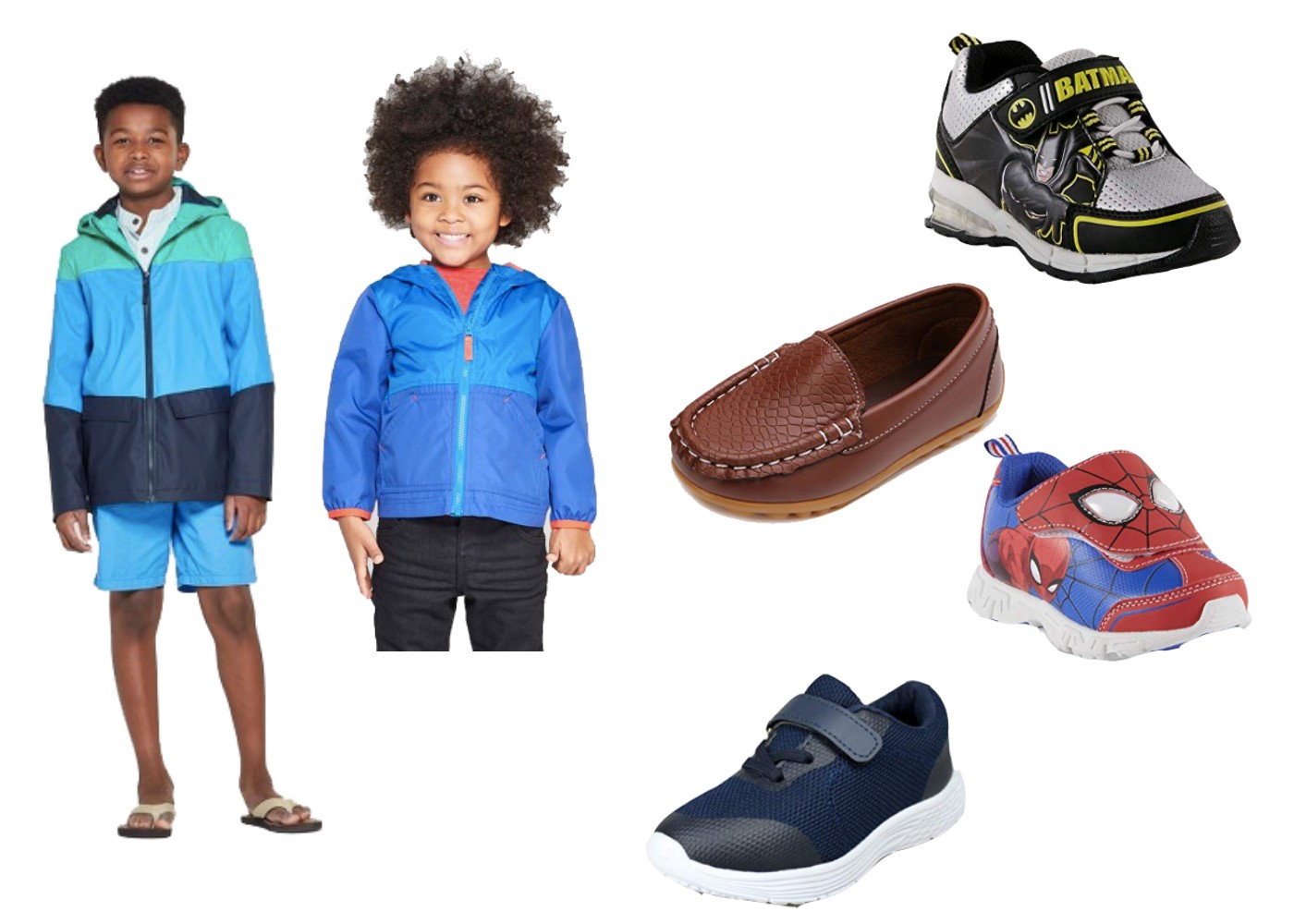 Now the extras! I did new swim trunks and rash guards for everyone when we went to Florida in March, so we were set on those.

Both boys definitely needed new rain coats, so I grabbed those from Target. Jackson takes his to nature camp in the summer and they’re also one of the must-haves we take with us when traveling.

We also did a full switch-out on socks. These Cat & Jack socks have been great for both boys so I bought a couple sets for each.

Finally, shoes. Dylan has been a master at destroying shoes lately and insists on only wearing shoes with characters that light up. Amazing. For Jackson, I picked up a pair of loafers and a pair of sneakers from Amazon. They were REALLY good deals and the quality was great.

A Valentine’s Treat for Kids

Sign up to receive exclusive newsletter content, special sale and event information, along with the latest blog posts right to your inbox.

You can find out more about which cookies we are using or switch them off in settings.

This website uses cookies so that we can provide you with the best user experience possible. Cookie information is stored in your browser and performs functions such as recognising you when you return to our website and helping our team to understand which sections of the website you find most interesting and useful.

Strictly Necessary Cookie should be enabled at all times so that we can save your preferences for cookie settings.

If you disable this cookie, we will not be able to save your preferences. This means that every time you visit this website you will need to enable or disable cookies again.